So the past few months, I have been focusing more and more on pronunciation for all levels of learners, no matter whether they are young learners or adult learners of English. Anyhow, I tried out a new lesson idea today which was partly inspired from the wonderful book, "Pronunciation Practice Activities", written by Martin Hewings. I would recommend any teacher worth their salt to purchase this book, as it offers some great pronunciation lesson ideas which could be incorporated into class immediately.
Most teachers would identify word stress with the teaching of new vocabulary or as a technique to support pronunciation for problematic lexical items. This is all well and good but it reminds me of a teacher reacting to issues rather than proactively focusing on areas of language learning. Personally, if a teacher is able to develop a lesson based around pronunciation and developing learners' awareness of pronunciation, so much the better. There is by no means anything wrong by reacting to pronunciation issues as they arise but I think it would be a nice change of focus when we remind learners that there are some basic principles that they can learn no matter how large or small the lexical item. Nevertheless, lets look at one lesson idea which is published in "Pronunciation Practice Activities".
The key aim for the lesson it to identify words by their stress patterns and I first introduced this by writing the following on the whiteboard:
I asked learners to tell me how many syllables there were in each word and I broke it down by underlining each syllable. Afterwards, I drew small circles above each to illustrate the syllable and then I elicited from students the stress location within the word, rubbed out the corresponding small circle and replaced it with a large circle - look at the stress patterns in brackets next to the words.
The next stage of the lesson was to draw a person, and I named this lady Sarah. I told the students that she travels a lot for business and that she has been several countries over the past few months on business. I wrote up a list of countries in random order on the whiteboard: Estonia, France, Germany, Japan, New Zealand, Norway, Singapore, and Venezuela. I told students that they need to determine which countries she visited in order by matching it with the corresponding stress pattern. I then drew stress patterns numbered 1-8:
I put students into pairs and asked them to match the words to the stress patterns. I monitored the learners and afterwards elicited from the groups each country from 1-8. As I mentioned before, it was the first time that I tried this activity. It worked really well and the students enjoyed the change of pace.

What words related to 'countries' or 'jobs' could you write in the table?

As an extension, I decided to draw up a table on the whiteboard, asked learners to work again in pairs and write down some country names within the table (see the image of the table above). I elicited different country names and expected word stress patterns from the class and we all were drilling the pronunciation of country names. As a final activity, we looked at jobs and using the same word stress patterns. It was successful and the learners left the class with a smile on their face.
Finally, I had this idea which I will use in the very future: you could create a flashcard activity whereby students have to match vocabulary with the corresponding stress patterns such as with a flashcard game (pelmanism), calling out a word and having the stress patterns up on the whiteboard and students run up to the whiteboard and then try to grab it before the other team or just using different stress pattern cards and you call out a topic and go round the class, eliciting vocabulary related to the corresponding stress pattern. I could record a future lesson using some of these ideas, so you get a better idea on how you could use these ideas in a future lesson. Food for thought, hey?
Anyhow, over to you now! How do you incorporate word stress in the classroom? Do you have any favourite activities? How do you get learners more aware of word stress?

Originally Written on Wordpress
Posted by Unknown at 14:33 No comments:

Last year, I recorded a wonderful lesson with a great teacher. I thought a lot about sharing it but wanted to wait. It has a been a long time but yesterday, I finally went back through the video files and I was drawn to it just as I had recorded it all those months ago. I decided to edit it and share it for all my great readers: the teacher really does try her best to get students to use pre-taught language. Watch to see what techniques she draws upon and how she engages all in the classroom. Enjoy!

Last week, I decided to record my lesson on spelling and I thought about a creative way to improve low-level spelling, particularly with Arabic learners of English. Watch the video below to see how I incorporated spelling and vocabulary in a fun and creative way! How do you like to incorporate spelling in lessons? Share your ideas!

Over the past few months, I have returned to my previous passion from my younger years - music. I have now dedicated numerous hours relearning and practising my scales, going out and playing music with other musicians as well as listening to a lot more music. This got me thinking about how similar language learning and music are.

In some sense, learners of music - particularly jazz - develop a range of bite size chunks of riffs and scales to employ during a solo and improvisation. Meanwhile, for language learners, we encourage learners to acquire and use a selection of language chunks. The more you practice with your second language or music, the better you get at it.

I suppose that we should encourage learners to enjoy their language learning experience and get out of the classroom more and use what they use what they have learnt. In the same way any jazz musician learns, the best way is just to play and enjoy what you are doing. When things go right, with both language acquisition and jazz improvisations, the greater you feel with a sense of achievement and it encourages you to develop and improve.
Posted by Unknown at 12:11 No comments: 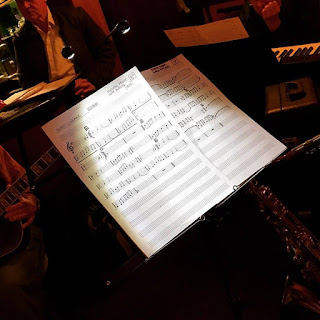 I finally reached the end of my blogging challenge and I feel rather annoyed that I didn't even reach the daily blog post for a year. I made a good attempt but I kept worrying about quality. I am sorry that I didn't reach three months but I gave it my best shot.

I am now renaming this blog to something more suitable and I will be blogging about my things related to English language teaching, my newly found passion in jazz music - this is one reason why I have had less time to blog here - and to post up my YouTube videos. I would like to thank everyone for their support but it is not the end. I hope, should you decide to start a daily blogging challenge, do it for 30 days. It can be more challenging than you expect.

Anyhow, when I was 12 years old, I learnt how to play the alto saxophone. About 3 months ago, I had my old tenor saxophone refurbished. This gave me the reason to dust off my saxophone and get back into playing jazz music again. I now jam with other musicians quite regularly and have joined an orchestra.

If you ever have a passion which you used to do when you were young, why not retry it? It is fantastic to rediscover music. I have made some new friends and I am always happy to play with other people. However, understand that it will detract your focus on what you would normally do. In this case, blogging each day about TEFL and English language teaching.
Posted by Unknown at 11:21 No comments:

Whenever you start you first class, you need to get them hooked right at the beginning. If you want to set any ground rules, then lead as you mean to go on. I have found setting a few basic rules integral for establishing any sort of organised classroom. For example, I have a whistle to hand if required but a few rhythmic claps to the hand and getting students to repeat the same clap organises learners straight away. If you want to get learners focused and ready for class, train them well and they will be ready for what lies ahead.
Posted by Unknown at 15:24 1 comment:

Apologies for the lack of updates on this blog. I have effectively been on holiday for a week and have been focusing solely on myself. I have not looked at blogging (on this blog or my main website), doing any further videos on YouTube or working. I have just had a break.

Sometimes, it is nice to just have a holiday and get away from everything.
Posted by Unknown at 02:59 No comments: